Harvard professor and New Yorker contributor Louis Menand has a new book out in January, The Marketplace of Ideas, in which he examines the U.S. university system. A very interesting, if unfortunately a little scattershot, series of excerpts appeared in the November Harvard Magazine.

On thing I think Menand totally missed, at least in the excerpt and perhaps not in the book itself, is the question about Ph.D training and professorial jobs on the one hand, and women, childbearing, and family work/life balance on the other. He writes about the rise in competition for academic jobs due to overproduction of Ph.D's, and about the rise in median time-to-degree. But he doesn't discuss the interplay with the life cycle especially as regards family formation.

One could make an argument that a lengthy time-to-degree setup is actually preferable for some scholars who wish to have children during training. The alternatives would be either not getting a degree, not having children, having them before the degree, or having them afterward, possibly during the stresses of a tenure-track position. I don't mean to suggest that this argument must be correct, but it deserves some thought.

Fairly late in the excerpts, Menand acknowledges that graduate students are an important part of the academic labor force. If tenure is important for preserving academic freedom, labor with relatively more flexibility is surely an even more attractive element.

And as a posted comment at the bottom of the excerpt points out, the physical sciences are really very different than the humanities and social sciences in their industrial structure. Postdocs in physical science are extremely common; I think median time-to-degree is thus a bit misleading when compared between physical and social sciences, for example. Lab work and dissertations that flow from a directed lab are also very common. And grad students in physical sciences not only teach, they also produce research, sort of a "double-whammy" incentivizing the professoriate toward keeping them around practically as indentured servants.
Posted by Ryan Edwards at 9:22 AM 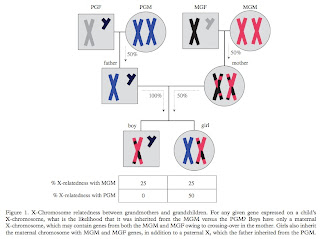 Molly Fox and a group of coauthors recently published a paper on grandmothers and child survival that shows improved survivorship among children with more of the grandmother's genetic material. The idea then is that grandmothers with "longevity genes" (not "grandma jeans") pass along their habit of being long-lived to their (paternal, it turns out) granddaughters. Hence a yet-clearer evolutionary argument for long life past menopause.
The authors examine girls' and boys' mortality based on the presence of maternal or paternal grandmothers, and they pose the idea that differences in the inheritability of the X chromosome across sexes of grandkids and paternal/maternal sides ought to be interesting. At the top of this post is their neat Figure 1 that traces the heritability of genes.

I was shocked that they had data that could inform this. I also wondered whether there are omitted variables. Is it just random whether a paternal or maternal grandmother is present, or whether one is present at all? Or is it connected to low SES or poor health somehow?
Posted by Ryan Edwards at 12:00 PM

The six community colleges in CUNY are said to have experienced a 9 percent increase in enrollments according to this Times article. The article also profiles a community college in Boston that offers a class starting at 11:45pm and ending at 2:30am. And here I thought a 5-8pm class was rough!
Posted by Ryan Edwards at 7:26 AM

Executive compensation and the propeller heads

David Brooks makes a fundamentally good point: that government must think it's really, really smart if it believes it can "fix" compensation packages on Wall St. to what they should be, without creating perverse incentives of some kind in the process. I particularly liked his citation of the cap on executive compensation several decades ago that unintentionally resulted in companies' increasing the bonuses and clustering at the cap.

But it also seems like the compensation system in the financial industry is contributing to the problem of excess risk taking and moral hazard. We ought to decide as a country whether it's in our best interest for us to subsidize the habits of Wall St. in allocating capital too riskily and then requiring public bailout funds to clean up the mess. If it is, maybe things are OK as they are. If we think folks on Wall St. are behaving too riskily, it's fairly clear that something has to be done about compensation packages that have only upside risk, and no downside risk. In the current system, the latter is borne by the public. Again, maybe that's optimal in some sense, or at least a preferred setup. But I don't think that's at all clear.
Posted by Ryan Edwards at 6:53 AM

CEA Chair Romer on the crisis

Another update from CEA Chair Christina Romer on the Great Recession, this time from JEC testimony.
Posted by Ryan Edwards at 1:42 PM

Uncertainty about climate change in a macro model

Recently, Paul Krugman and others have begun discussing optimal policies in light of climate change; apparently the forthcoming sequel to Freakonomics discusses this issue too.

Krugman points to a paper by Martin Weitzman published earlier this year in RESTAT that revisits the issues raised by the Stern review and William Nordhaus and others. Weitzman's clever point is that uncertainty in future outcomes reduces the moderating effect of time discounting on future costs, raising costs of inaction relative to benefits.
Posted by Ryan Edwards at 10:06 AM

An excellent article in today's WSJ chronicles the struggles of a low-income worker with $36,000 in debt, $26,000 of which is student loan debt. The article also surveys the statistical picture we have of trends in debt among income groups before the subprime collapse, which seem like clear harbingers now.

When I was in Washington in 1999, I'd hear that similar concerns about the sustainability of debt among low-income households were apparently raised by President Clinton, who'd had a gut feeling about it. At the time, the statistics did not seem to suggest there was imminent danger. Indeed, the bursting of the Internet bubble in 2001 was not caused by nor did it destroy the finances of low-income households. This time, the story was clearly different.

An issue today is the "game theory" of debt for low-income folks. The article reports that the worker in question refuses to agree to debt relief (by paying off a large portion of the debt now in return for forgiveness) because of its long-term effect on her credit score. On the other side, credit card companies have been raising interest rates on balances because of the fear of rising default rates. But rising interest rates are a self-fulfilling prophecy of increased default.
Posted by Ryan Edwards at 3:15 PM

Robert Barro describes his recent NBER Working Paper 15369 with Charles Redlick on fiscal multipliers in the Wall St. Journal. They're pessimistic about spending, less so about taxes, but they also seem to think the evidence on tax changes, from the recent paper by the Romers, is less clear.
Posted by Ryan Edwards at 8:14 AM

Fear and the flu

Michael Specter summarizes anxiety about H1N1 and the vaccine in this week's New Yorker. I was three years old by the end of 1976, when a swine flu outbreak among troops at Fort Dix prompted the Ford Administration to initiate a mass vaccination program.

A 2006 article discusses the CDC's perspectives and lessons learned from the 1976 swine flu.

I was talking to an epidemiologist friend recently about public perceptions of the state of the macroeconomics. I said it was about what would be the public perception of the state of epidemiology if H1N1 were to kill 10% of the population. But I messed it up: I should have said 5%, or the rise in the unemployment rate rather than its current level.
Posted by Ryan Edwards at 7:37 AM

Paul Krugman blogs about fiscal multipliers, citing some new work on the topic by Ilzetzki, Mendoza, and Vegh. They have a new dataset with quarterly observations on GDP for 20 advanced and 25 developing countries, and I think they use a VAR with an identifying restriction suggested by Blanchard and Perotti.

Their bottom line seems to be that the size of the fiscal multiplier really depends on characteristics of the particular economy. Small, open economies with flexible exchange rates have a very low multiplier, as do heavily indebted countries. Contrary to what Krugman suggests, Ilzetzki and co. find that the post-1980 U.S. (in other words, after the Volcker disinflation and the commitment to price stability and flexible exchange rates) has a pretty low fiscal multiplier, around 0.3 or 0.4.
Posted by Ryan Edwards at 8:35 AM