Scaring seniors with ... living too long?

I enjoyed reading this NPR article discussing retirement saving for some insights into how individuals and their advisors view and plan for spending needs in retirement. The president of EBRI, Dallas Salisbury, describes his "Rule of 33," which is to have assets (including Social Security) equal to 33 times your annual spending before retiring.  That sounds adequate for roughly 33 years of additional life.  But if average asset returns are perhaps 3% in real terms and if typical consumption growth is 2%, a quick calculation reveals that 33-fold buffer to be good for more like 40 additional years of life.

Needless to say, there's plenty that can cost a bunch in old age, namely out-of-pocket medical or nursing care. But I think the factor of 33 may be a little on the high side.  For the average American male born in 1950, average years remaining at age 65 (in 2015) are 17.6, according to Social Security cohort forecasts, while they are 20.3 for women.  The median remaining years are about 20 and 21, which is another way of saying that such individuals have a 50% chance of living to 85 and 86.

To be sure, education, income, genetics, smoking, and many other things can either increase or decrease one's survivorship probabilities.  But I was really shocked to see what must have been a flat-out error in Mr. Salisbury's quote about his own parents' survivorship:

"They were in their mid-80s, as old as they ever expected to live. But he pulled out his computer to show they had a 50 percent chance of living until age 99."

This seems exaggerated to me. In the figure below, I've plotted survivorship probabilities for men and women in the 1920 and 1930 birth cohorts, and in the 2000 period life table.  All are from the SSA data, and I grant that there are subgroups that will live longer and shorter than those shown here. There are some differences between these groups, but you can see the rapid reduction in survival starting at age 85.  The median age at death for these groups is around 91, and only about 10% live to age 99. I'm not sure what Mr. Salisbury had on his computer, but I can't imagine that any life table would predict such a huge difference in survivorship probabilities --- something like 40 extra percentage points --- for even the most healthy seniors at these ages. 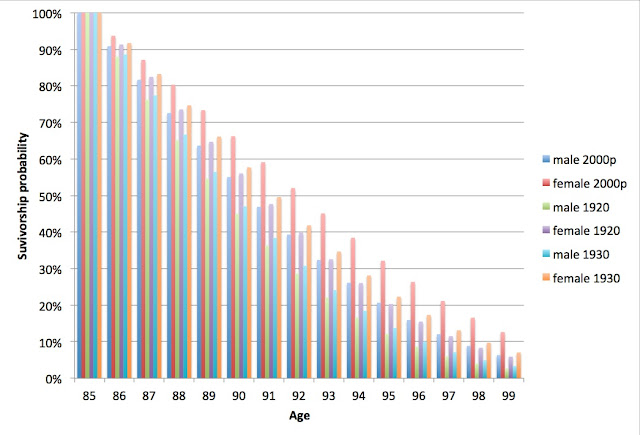 UPDATE:  Dallas Salisbury clarifies --- he meant that starting from age 65, the probability of at least one spouse surviving to age 92 is 50% in actuarial life tables he had obtained from an insurance company.  Surprising, right?  Perhaps that estimate is a little optimistic (or pessimistic, depending on your point of view); compared to Social Security forecasts it is.  But it's a sobering look at the very real risks of living too long.  There is wide variance in length of life.
Posted by Ryan Edwards at 8:38 AM

Mauren Dowd writes about Jerome Groopman and Pamela Hartzband, two Harvard/Boston clinicians and well-spoken advocates of quality care choices. I heard NPR's Terry Gross talk with them recently on Fresh Air. One of the more striking things they mentioned on Fresh Air was how best practices guidelines tend not to stay best practices for long. They found a half-life approaching as little as five years. But Groopman and Hartzband still advocate the use guidelines, just in concert with patient-specific insights.

In the New Yorker, Atul Gawande writes about "coaches" for doctors, teachers, vocalists, you name it. NPR discussed it on Talk of the Nation. I couldn't help but think about coaches for college professors. In a way, we already have them, although the sports analogy usefully parses the distinction between "referee" and "coach" --- the latter is on your side, the former not more often than half the time (or less in a multi-person game!). But coaches for instruction would be another matter entirely. I was astonished at the level of care taken by the middle school teacher in her approach to instruction according to  Gawande's piece. But the article also reveals that she had been losing gusto for the job, and the coaching reinvigorated her by enhancing the quality of her teaching.

Journal referees often seem like they're doing anything but enhancing the quality of research, but that's probably because of the natural of double or single-blind reviewing. If they communicated by speaking, I bet it'd be clearer that they're trying to improve the quality of your output.
Posted by Ryan Edwards at 7:19 AM

John Cochrane writes about monetary policy, debt, and inflation in the fall issue of National Affairs. He appears to pinpoint future entitlement spending associated with the retirement of the Baby Boom as the primary fiscal issue that may trigger a debt crisis. I think he and many others are absolutely right to emphasize the importance of this issue, but it's by no means new knowledge, nor is the problem expected to become appreciably worse than it was years ago. Drawing sharp distinctions between Keynesians, monetarists, and so on may be useful in understanding monetary policy and fiscal stimulus proposals, but it doesn't seem relevant to the debate over long-term fiscal policy, where I think there is far less fundamental disagreement about causes and consequences.  The disagreements are over which benefits to choose at what costs.
Posted by Ryan Edwards at 11:12 AM

Paul Krugman posts an interesting take on the Euro crisis, with some data on average current account balances and average fiscal imbalances.

I like the table, but check out the relationship between the fiscal balance and the current account balance.  A scatterplot reveals an upward sloping relationship with a slope of 1.4 (t of 2.7) and an R2 of 0.4.  Surely not ironclad but suggestive that the story we tell college students about the U.S., that public dissaving produces a trade deficit, other things equal, might also be relevant here.  Even if ultimately it's the current account that actually produces a crisis, the budget deficit might be a pretty important cause. 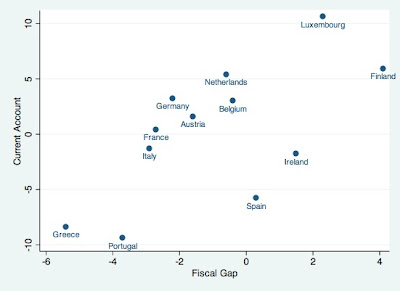 Today in the NY Times, former chairman of the Fed and Obama's Economic Recovery Advisory Board argues forcefully against higher inflation as a potential tool for rebalancing the economy. Elsewhere, folks like Ken Rogoff and others have suggested that a period of higher inflation might be the most direct path to recovery from a position of overleverage. An article in Bloomberg from 2009 presents a discussion, including the strategy of price-level rather than inflation targeting.

Volcker's got to be the preeminent authority on cleaning up the aftermath of inflationary policies, and his point is plain:  expectations of higher inflation are extremely hard to wring out of the economy, so it's not worth going there.

Courtesy of Greg Mankiw's blog, here's another perspective on related issues, courtesy of John Taylor.
Posted by Ryan Edwards at 7:43 AM

I can't help but feel like I'm picking on an easy target, but Dick Cheney's view of fiscal policy in a recent PBS interview just makes me shake my head in sadness. The challenge posed by entitlements spending is real, but it was as real in 2000 as it is today. Demographic trends have been known at least since the Social Security reform of the 1980s.

What a disingenuous thing to call for austerity now, after eight years of utter fiscal profligacy under the supervision of Bush and Cheney. Planning for population aging should have been the strategy all along, Mr. Cheney, you utter political hack.

Now let me apologize for dog-piling. I hope that when I'm in my twilight people are more forgiving of the ridiculous things I may say.

The New Yorker's John Cassidy discusses long-term trends in earnings and income in an interesting blog post. Cassidy is right that trends in the statistics on median earnings and income are alarming, but there are a few more nuanced parts of the story that seem to be missing from this short piece. But perhaps they're in his larger work.

Average earnings and income have been increasing rather steadily. That there's a difference between trends in the median and in the average speaks to rising earnings and income inequality. Clearly a reason not to be optimistic for those in the left tail if they're stuck there, but a little more nuanced than pessimism-for-all. 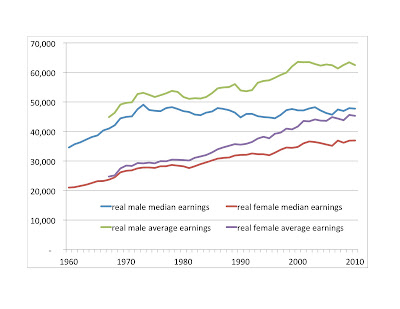 Second, if one looks at total compensation or unit labor costs, one also sees a different picture, and it's because of the rapid rise in benefits, namely subsidies for health insurance premia. Trends in the average are strongly upward, and I imagine the same would hold true for the median, which I don't think the BLS or Census publishes (these are establishment, not survey data). Rapidly rising health care costs are painful, and we pay more than do those in other countries for what we get out of it, but let's not forget that Americans also living longer on average than earlier generations. (And yes, there is an inequality story here too.)

Finally, let's not forget that the story for women has been starkly different, whether measured by mean or median earnings. Surely the increase in female earnings, while perhaps not always directly good for men in some hyper-selfish version of the world with no partnerships, is an optimistic rather than pessimistic trend.
Posted by Ryan Edwards at 12:33 PM

Yesterday NPR reported on some Congressional testimony by CBO director Doug Elmendorf. He laid out the cold, hard facts about fiscal sustainability sprinkled with some common sense about when during the business cycle to tighten, when to loosen, and how to plan ahead. Speaking clearly and firmly about economic policy in a diverse setting is a great skill.
Posted by Ryan Edwards at 8:19 AM

The Times offers twelve viewpoints on reducing college tuition, specifically in response to Gov. Rick Perry's call for a $10,000 college degree. There is quite a diversity of perspectives, and there are a bunch of interesting ideas, many of which seem focused on squeezing more output (student-taught-hours) from faculty. But the prize goes to the president emeritus of GWU, who offers these gems (emphasis mine):

"We can reinvent what we call the college experience. Will it be the same? No it won’t. Will it be better or worse? Yes it will. I hope the governor does not have plans for a $10,000 medical degree."

Princeton health economist Uwe Reinhardt discusses growth and inequality in the Times, and cites a nice article in J Econ Lit by Atkinson, Piketty, and Saez that reveals, among other things, what happens to cross-country patterns in average income statistics if you remove the top 1 percent.
Posted by Ryan Edwards at 11:35 AM