Today a room-for-debate blog on public-sector pensions covers much relevant ground. The management costs and fees associated with 401(k) style investment funds are not insignificant, but traditional defined benefit pension plans require growth in the "tax base" associated with funding them. For plans funded solely by contributions (thus far, Social Security is an example), that ends up being total payroll. I can't imagine there are many states and localities that have been expanding their base of public employees much over the past several decades or into the future. No wonder these plans are massively underfunded.
Posted by Ryan Edwards at 5:48 AM

Not what taxation is supposed to be for

An article describes a "homebrew" tobacconist in Brooklyn, who has decided to reveal her money-saving hobby in order to highlight her dislike of local anti-smoking regulations. She claims her homegrown tobacco saves her a lot of money, and more:

“It’ll make the antismokers apoplectic,” said Ms. Silk. “They’re using the power of taxation to coerce behavior. That’s not what taxation is supposed to be for.”

It's probably a common belief that taxation is not for discouraging things. After all, we tax income but want people to keep earnings, and we tax sales although we want people to keep spending. But on the other hand, we traditionally taxed imports (we do that less now) because we wanted to reduce them and push spending toward domestically produced goods.

In the case of things like smoking, which affects other people besides the smoker who chooses to smoke, taxes move the private costs faced by the smoker closer to the larger total costs borne by all citizens.

We could do a better job explaining these aspects of economics in high school and college!
Posted by Ryan Edwards at 12:31 PM

Economic Report of the President 2011

The 2011 ERP was signed and released on Wednesday, and like always it provides a nice summary of economic events and analysis. Figures 1-1 and 1-2 up front were rather shocking; they reveal how little private nonresidential investment there had been during the recent boom.

A quick look at the stock estimates from the BEA revealed a similarly bleak picture about recent growth in the stock of productive capital: 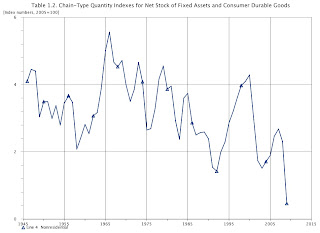 Growth in the capital stock had really accelerated during the boom of the 1990s but hadn't done much during the 2000s.

Another chart I really liked was Figure 3-4, which shows average earnings by educational attainment based on CPS data since 1963. There's stagnation in each of the trajectories except for the BA or higher category. 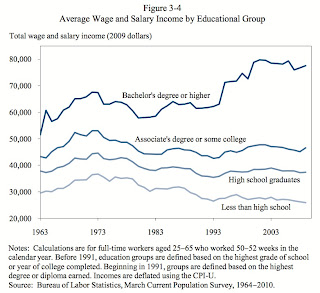 All the recent fervor about state and local unions, budgets, and wage contracts seems not to have included much on the subject of whether state and local government workers are paid more, the same, or less than equivalent private sector workers. If the answer is the same or less, then legislated reductions in their compensation are likely to reduce the quality of government services. But if government workers are paid "more than they are worth," that implies that reductions would only reduce the pool of applicants and probably not the amount of employees nor their quality.

A book chapter by Alan Krueger in an NBER volume from 1988 discusses trends in earnings. A big part of his analysis concerns the federal worker bonus. The last paragraph summarizes his findings on state and local government workers' earnings:

At the state and local government level, both the longitudinal and cross-sectional analyses suggest that the differential in earnings between public and private sector workers was small and positive in the 1970s, but became negative by the mid-1980s. Furthermore, the empirical analysis finds no evidence of a difference in pay between union and nonunion members in the public sector.

One of the big changes since the 1980s has been the movement away from defined-benefit pensions in the private sector and toward defined-contribution plans. I think the primary difference between them is the amount of risk, and not the average level, but a larger issue today may be differences in post-retirement compensation for public versus private workers. Health insurance copays may be a big part, but pensions might be as well.
Posted by Ryan Edwards at 1:39 PM

A fun article on "Monopoly" and Milton Friedman appeared over the weekend. The author was a devout fan of both while a student at the University of Chicago, and the central tale is of a "no rules" night playing Monopoly. Zoning laws crumbled, and players could build as much as they wanted on property. Rents soared, and money was tight, so players printed new money. Prices soared (I'm a little less clear on how that happened), so players decided to retire some notes (since "inflation is always and everywhere a monetary phenomenon"). And then a liquidity crisis purportedly hit and caused bankruptcies among the players.

A fun caricature of some classic insights, even if I'm not sure how much to believe. Then again, one can throw a Monopoly board a pretty far distance....
Posted by Ryan Edwards at 7:41 AM

I'm not sure it's his original contribution to the discussion on growth versus stagnation in the U.S., but David Brooks raises some relevant issues concerning how we measure well-being. I haven't read it, but Tyler Cowen's Great Stagnation book argues that growth in total factor productivity and median household income has slowed down after about 1973, which is undeniably true if perhaps a little overblown. Brooks points out that at least a portion of the new economy probably isn't being measured particularly well by GDP. Well-being has probably increased because we have access to a lot of free services like Twitter and facebook, and there is an array of other such pursuits that may not be measured very well by market transactions.

Brooks also worries about how the illusion of such non-market wealth --- if folks think they'll eventually see financial returns to welfare-improving contributions that are now largely free and not captured by markets --- could have played a role in driving folks into overspending. I think both points are interesting, but I also suspect that overindulgence prior to the most recent collapse was instead driven by very tangible market returns associated with real estate. One could certainly also call such market returns illusory, but they're very different from the perceived wealth that Brooks is talking about.

Is the share of our well-being being that is produced outside of markets rising, falling, or staying the same? The rise of market substitutes for household production, like cleaning and babysitting services, would suggest it's probably falling, not rising. But I would certainly agree that some part of my daily well-being comes from web services that are completely free and didn't exist at all several years ago. I just doubt that value has risen by a lot relative to all the other things I do.

UPDATE: An op-ed by Scott Turow et al. today obliquely speaks to these issues. Their point is that the thriving creativity of the Enlightenment was due in part to playwrights like Shakespeare and others being able to market their intellectual property and be protected by copyright. The link here is that if stuff is free, whether intentionally or unintentionally (through theft), its value added isn't measured, nor do any pecuniary profits accrue to the creator.

UPDATE PART DEUX: One thing Turow et al. left out is that innovation has often been supported by government, whether monarchy or republic. In Shakespeare's time it was the former; today, it's the National Science Foundation or the National Institutes of Health.
Posted by Ryan Edwards at 6:08 AM

The BLS posted an updated Beveridge Curve, which graphs the job vacancy rate against the unemployment rate. Last fall Paul Krugman wrote a blog post about recent developments. What's striking is the time we've been in that counterclockwise spiral "off" the curve in the direction of more vacancies but unchanged unemployment.
Posted by Ryan Edwards at 1:00 PM