I was really impressed by Mitt Romney's defense of his health insurance overhaul in Massachusetts during the Florida debate last Thursday, as reported by NPR.
Posted by Ryan Edwards at 5:58 AM

Jonah Lehrer offers a New Yorker piece about idea production that compares brainstorming, the non-critical working in groups, to alternative methods. He argues criticism can be a good thing, especially with the right mix of new and old talent. Who could argue with his pick of "West Side Story" as the product of a sweet spot of old and new creative talent on Broadway? He also writes about the upsides of a pell-mell physical structure, such as found MIT or Pixar, where thinkers unexpectedly run into each other and come up with new ideas.
Posted by Ryan Edwards at 7:37 PM

A newspaper headline today reads "fastest growth in 18 months." Here's a graphic showing quarterly log real GDP (red line with circles) and CBO's estimate of potential real GDP (blue).  The economy "went south" and hasn't exactly come back, has it!  By these measures, we're looking at an output gap of about –7%. 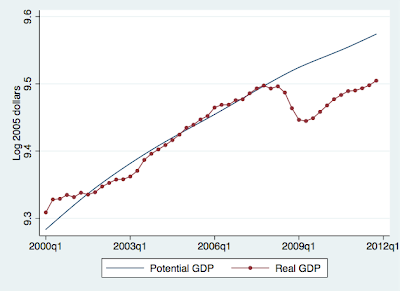 Today Paul Krugman's column presents a view of the recent Times piece on Apple and outsourced jobs consistent with his earlier work on economic geography that helped win him the Nobel prize. I'd summarize the argument as having to do with physical capital: in addition to quantity and quality, the location of plants and infrastructure can also be important. Less clear to me (but maybe it's in his work somewhere) is what role human capital plays in all of this. Harvard's Ed Glaeser has written extensively about that sort of thing, but I think his emphasis is less on manufacturing than on the idea economy.
Posted by Ryan Edwards at 10:40 AM

When I read Greg Mankiw's op-ed on the tax code, I started thinking about the tax preference for homeownership through the mortgage interest deduction. Not too long ago I tweeted about how a windy night on a Brooklyn street full of rental units resulted in a veritable cyclone of trash. My point being that when everyone's renting, nobody hauls their trash to the curbs themselves, and nobody does anything about it when the workers who do didn't do a good job. A classic tragedy of the commons.

Needless to say, just because somebody is a homeowner wouldn't guarantee they wouldn't free-ride on their neighbors and let their own trash fly free as a bird.

But here's another perspective I found today, in which litter and other indicators of neighborhood risk causes low homeownership rather than the reverse, which is probably the more traditional perspective. It raised the obvious question in my mind of where the litter comes from in the first place, but it could be proximity to commercial strips or commuting hubs, I suppose.
Posted by Ryan Edwards at 10:55 AM

In the Times, Larry Summers opines about the structure of college learning and future trends, with plenty of provocative perspectives. It's hard to disagree with the notion that teaching collaborative analysis rather than individual demonstration of knowledge would probably be a better fit of the needs and the technology. But under conditions of large student-to-instructor ratios, the free-rider problem would be made a lot worse by such endeavors. I wouldn't suggest that the current passive-learning model really gets this particularly right either, but it's hard to see how assigning credit based solely on group projects could ever get the incentives right for students without a lot of monitoring.
Posted by Ryan Edwards at 11:13 AM

The release of the NHANES data is an biennial event, and I wrote about it in 2010 too. This year, the same picture has emerged, as summarized by NPR, of obesity rates based on BMI that are not statistically distinguishable from recent earlier rates.

Does this picture make it appear that obesity prevalence is slowing down? 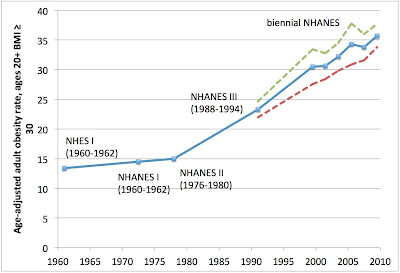 This NPR article reports on the controversies surrounding the November 2011 release of the 2010 Demographic and Health Survey of Afghanistan. The 2010 period life tables appear on page 114 of the final report and reveal the shocker:  life expectancy at birth (e0) is estimated at 64.2 for females and 63.6 for males, up about 20 years from the previous "measure" from around 2002.
Posted by Ryan Edwards at 8:50 AM

Myths in "The Myths of Japan's Failure"

After reading Eamonn Fingleton's op-ed piece on Japan published today in the Times, I remembered why I decided to study economics, which also led to studying demography. Fingleton turns down into up and left into right when discussing Japan's recent economic and demographic challenges, which is why his writings are more at home outside academic circles. He cites faster growth in GDP per capita in the U.S. and then suggests the measure is biased because of methodological advances because somebody said so. He doesn't mention persistent deflation.

On the population side, his single focus is on the Japanese lead in life expectancy (or mortality), which is indeed impressive. But combined with ultra-low fertility, which has already resulted in a shrinking labor force, declining mortality in Japan is a gift that presents significant macroeconomic and microeconomic challenges. Unemployment in Japan is and has always been much lower than elsewhere, except for a brief window around 2000, but participation rates at older ages are no higher. Like its macroeconomic performance, Japan's demographic profile does not inspire optimism.
Posted by Ryan Edwards at 2:54 PM

Today the Post reports on a study showing unemployment by undergraduate degree in the 2009 and 2010 waves of the American Community Survey. The graphic shows unemployment rates among recent college graduates aged 22-26 ranging from 13.9% for architecture majors to 5.4% for education or for health majors.  I'm not exactly sure what a "heath" major is, but apparently they exist!

Economics winds up lumped in with all the other social sciences, for whom just-graduated unemployment was about 9%, near the national average for all workers.  Business majors experienced more like 7.5%.

This Room-for-Debate installment from the Times examines whether public school teachers are overpaid in terms of both earnings and deferred compensation like retirement and health-care benefits.  A recent AEI/Heritage study counts up the data in the National Longitudinal Survey of Youth and argues that public school teachers are overpaid compared to their private sector counterparts with similar scores on the Armed Forces Qualification Test (AFQT).  One of the roundtable contributors argues that controlling for the AFQT alone isn't enough, and once you control for years of education, public school teachers appear to earn less than they should.

Wouldn't it be nice to be able to just drop a covariate whose presence generates a result that doesn't fit with the story?
Posted by Ryan Edwards at 7:12 AM