We should certainly be concerned about health insurance coverage in the U.S. during the COVID19 pandemic. But so far anyway, Census survey data suggest that either (A) people have successfully kept their insurance coverage despite the surge in unemployment, or (B) they don't yet know they may have lost their employment-based coverage.

Here's what spurred me to look more closely at this:

It’s worth noting that a quick glance suggests this study *models* what likely has happened https://t.co/OOKkdgurSt
— Ryan Edwards (@RyanDEdwards) July 13, 2020

The Times article cites a study by Families USA that leverages work by Urban Institute researchers from March 31, combined with unemployment rates. In other words, these are estimates of what should happen to health insurance when folks lose coverage through their employers.

But we also have some direct measures of health insurance coverage, albeit imperfect ones, through the innovative Census Pulse survey that debuted in late April. Technical notes show low response rates, around 2-4%, which were anticipated but still remain concerning. The mode of interview was online, with contact via email and text message.

The Pulse survey asks exactly the same question about health insurance coverage as appears in the annual American Community Survey: 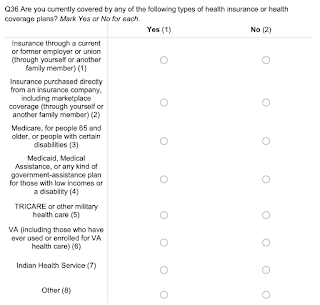 Respondents who check "No" for all of these boxes are uninsured. Below is a time series of the share of U.S. residents aged 18 and older who indicated they were uninsured either in the ACS (2008-2018) or in the Pulse: 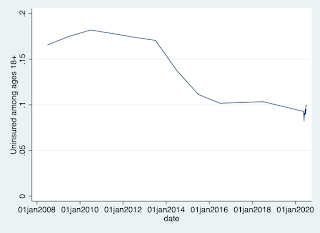 Finally, here's a zoomed portion of the graph during the Pulse period only: 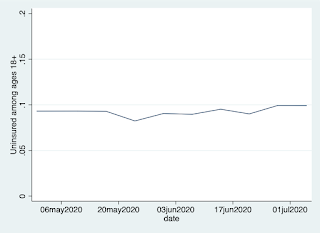 The quality of the Pulse data is the big open question here. Published standard errors from Census imply that there is only about a ± 0.6 percentage point confidence interval (i.e., 1.96 SE's) around these point estimates, due to sampling error alone. The big question we don't know the answer to is whether people who are more likely to answer the Pulse at all are more or less likely to have lost their health insurance than others. You would think that folks who are unavailable are probably those who are busy working, which would bias this estimate of uninsurance upward.

Needless to say, permanent losses of jobs and insurance could be right around the corner. But for now, it does not appear to have happened.
Posted by Ryan D. Edwards at 12:24 PM